Can Someone Explain What Happened On Hopesfire

I've been sitting out of AvA until I get higher rank, so I don't quite understand what happened to us on Hopefire. Can someone explain this to me.

1. Where we getting farmed continuously, and why couldn't we fight back? Was this a sudden thing or how did it come about?

2. From the email newsletter Fog stated "I can understand the frustration of repeatedly getting wiped by the hundreds by a few players." My question. How can a few people be so powerful to wipe out entire raids? Is this over powered (OP) a permanent feature of AvA? If so, doesn't that basically ruin the game with things being so out of balance? How much did the recent patch mitigate any of this?

3. What are the plans on Volendrung to help prevent the same thing that happened on Hopesfire.

OK, I can do my best explaining this.

A guild in the early days made an agreement with a Daggerfall guild to trade the center ring for a few days to get everyone on both factions guilds their emperorship abilities. Before the past couple nerfs to the Vampire abilities when you combine vamps with emperorship and legendary gear you end up with a God mode player. What I mean by this is 1 guy can wipe 3 raids in a choke point in seconds. We saw it many times. 3 of those together kick out enough healing that no matter what you throw at them they regen health faster than you can dish it out. Now on Hopesfire there is a pack of 15 of them that roam together and kill anything that moves. When we started our AvA campaigns we had 160+ people out there. The second week we had 140, third week 60. It was quite obvious that going up against these players was destroying morale and any momentum we had in launching into ava in this game. If we continued course on hopesfire we would be running a 20 man now at the most.

Zenimax is actively applying patches to reduce this but those patches will not arrive soon enough. This is why I searched for a new campaign for us. We need a place where we can play and not get spawn camped by gods. Fortunately with enough sacrifices to the gods of hopesfire I got an audience with their leader and explained to them the golden rule of Foghladha. "Never beat your opponent so bad they don't want to play you". I explained to him that while it might be fun for them now, our numbers shrink every week, and if they continue course they won't have anyone left to fight. I told them that we were changing campaigns and we would appreciate it if they go fight someone more their level and leave us to our own devices. They agreed and said they would stay off of Volendrung. Since then there has been no sign of them.

Now Volendrung. Let me talk to you a little about Volendrung. Out of all the Campaigns, Volendrung is the most evenly matched with Ebonheart Pact being the underdogs. I mean look at this scoreboard: 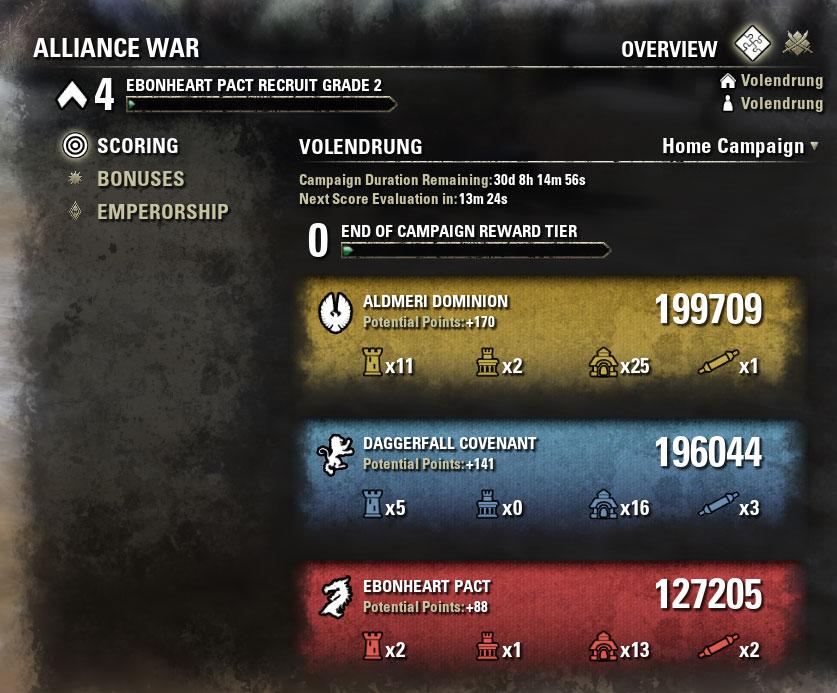 On top of that it is the official server of the Roleplay community (teso-rp.com) and if you ignore the current PC people there who are just there to get emperor and then plan on leaving the natives are very friendly, open to anyone to join them, and are very happy to have us join them a few times a week. For this campaign to be a downright 3 way battle all they needed was a community like ours to arrive and harbor a little more numbers for the Ebonheart Pact.

Here's what the map looks like at 10AM this morning: 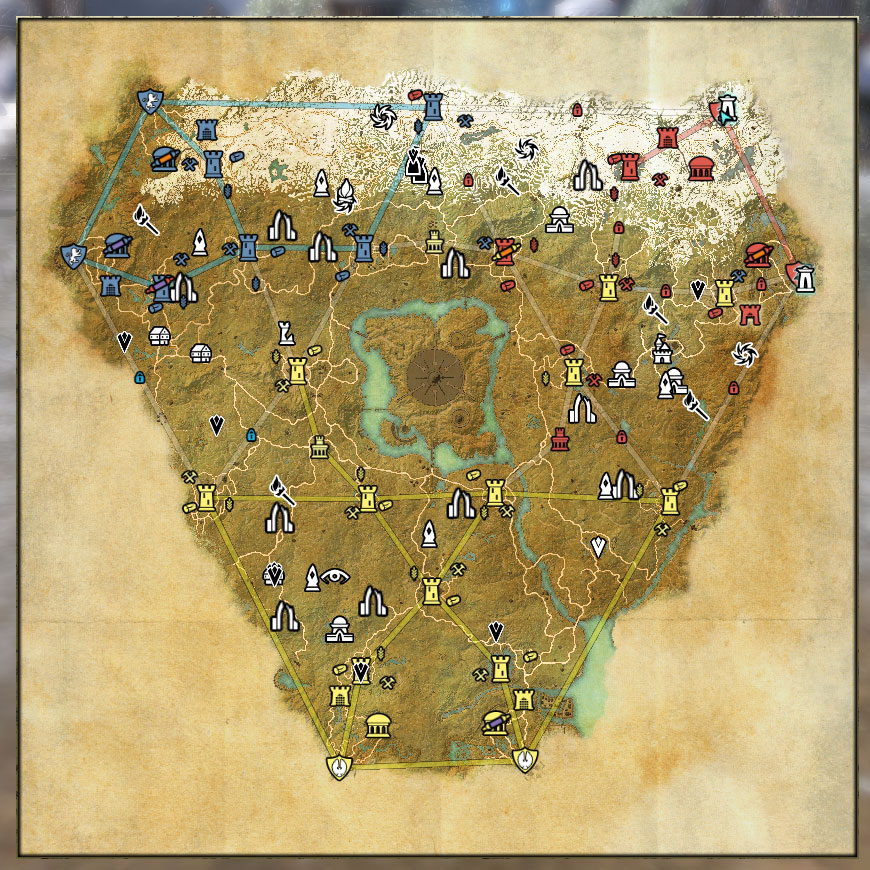 I'll take another snapshot at 5PM. 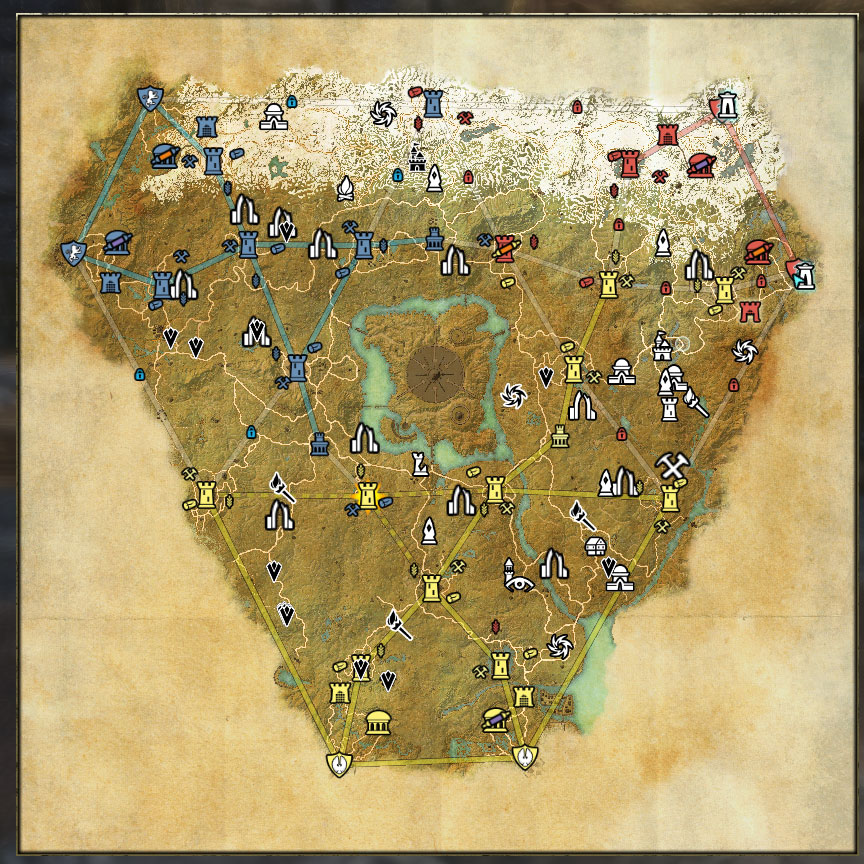 The other main attractor here is that all 3 sides have a Combat Etiquette established that most everyone follows. They always leave the opposing faction one of their home keeps to work out of. They frown on spawn camping and so long as you don't have a scroll behind your wall they leave your home keeps alone. The climate here is much nicer. You can find low levels out there, high levels out there, and a whole lot of 3 way fights. We've had some of the most fun in Volendrung since we started visiting. Plus our numbers have been increasing every week instead of shrinking.

The biggest difference I see is that it's not AD vs EP. It's AD vs DC and EP trying to survive. When we take the field it's a full fledge no holds barred 3 way fight. You've got to worry about 2 enemies not just 1. We want our enemies more concerned with DC than us. That opens up opportunity and keeps our players on off nights from being subject to constant farming. Hope this sums it up.

Succinct and logical. When should we set it as home?

I'm glad that you said something in the newsletter about this, Fog.  I've all but lost complete interest in "AvA" in this game and for that to happen to me speaks volumes.  For me to never make public that I've lost interest or give any reasons as to why, screams over a lahar siren.  I'll give ZOS the benefit of the doubt and look into how AvA feels on the Volendrung map.

Don't switch campaigns till the end of the first campaign (30ish days from now?) if you have any time invested in Hopesfire. You'll forego all rewards from hopesfire. After the first campaign ends you'll want to make the switch. Some of us have already transfered over that don't care about those Hopesfire rewards.

"It's not the loot and accolades you walk away with, it's the memories and friendships that you cherish forever." - Foghladha
Awards & Achievements

this makes logical sense, and honestly the whole issue with hopesfire seems to focus around exploiting a system that I honestly don't care and that is the whole emperor thing.   Now I don't mind the title, but frankly the extra skill line seems a bit OP to me.  Its one thing to have it while you wear the crown, its another thing to have access to it when you are not wearing the crown.  I personally think they shouldn't have access to it.  To me this feels like if you had worked the vampire line, got the skills, then dropped it to keep a sub par version of the skill line still intact even if you were no longer a vampire.   I personally feel that the only real fix for the emperor ordeal that happened on hopesfire is that the line is only actually useable when you wear the crown.

As was also mentioned, they seemed to harbor no moral ground or code of honor, thus they took a system that could be abused and they abused it.  This was no different than the players themselves abusing the exploit to level so incredibly fast without having to do many of the quests by taking advantage of the boosted experience from hitting zone bosses.    An exploit, is only an exploit when people take full advantage of it willingly.  If only one person knew about it, but decided to not abuse it, it would never be exploited, but it is used, and abused.

Now that being said, I am one who is not totally excited about pvp in general, however I do like the AvA system that eso has to a point.  I love the strategy behind it, I love taking keeps, and having a 3 way fight.   So this is great news that we are finding a better home with which to enjoy the battles in.   That being said, i will simply just wait my turn to move my home campaign from hopesfire after I get to v12+ and can find some more time to actually play and participate with the ava crew.   I can always guest till the campaigns reset.    It was however unmotivating for me, to even attempt ava if I could get the time, when so many people were getting frustrated or talking about the steamroller groups.   My one trip out their was fun and exciting, I did spend a good chunk of a saturday around lvl 14 out their and earned close to 20k allaince points in one day.   It was fun, but when the excitment ended was when we started going up against the wall of v10s.   I don't mind a challenge but it just felt like such a huge wall that stopped any sort of fun or progression and made me not want to go back for a while.  This is what I did, I decided to focus on leveling when I could get time to play.   Not that I am finally in the vet levels, if i can find time to play and time to participate I will come guest on this other campaign, because I much rather see a give and take, or uphill fight, than to slam against the steel wall with no hope for anything.

sad to say, but hopesfire seems to have burned out on the flame of hope of ebonheart doing anything their.

Thanks Fog for the clarification. Has Zenimax given a stance on the issue? I cannot see AvA working long term with such an OP mechanic in place where a few can over power everything.

They've already made several changes. They will continue tuning fit until it's fair. The problem is if they make sweeping changes its like jumping out of a hot shower into a freezing pool. They have to reduce it over time to keep people from completely freaking out. (See rift patch just before storm legion. That 1 patch reduced activity I. Gaiscioch by 47%. Sweeping change.)

"It's not the loot and accolades you walk away with, it's the memories and friendships that you cherish forever." - Foghladha
Awards & Achievements

I still think it is ridiculous that the ex-emperorship thing (those that traded it around on purpose) hasn't been nerf-hammered by Zenimax.  That should have been a 3-7 day suspension, and a warning not to work cross faction to break game mechanics, AND all those emperorships removed.

Everyone should have to get it fair and square... and cheating should never be tolerated when it can be so easily determined.


On a happier note, would people be interested in a Cyrodil Dolmen destruction expedition sometime?

yep i hate  cross faction win trading more than  anything same as the scrubs that used to  RP  farm friends or alts etc in warhammer .

you`d have someone high renown rank ie  RVR rank and have them naked and have a low rank toon chain killing them to rank up .    In warhammer you recieved  zone message if you were in the RvR  area where the kill trading was happening , normally a obscure place in a empty zone .

i used to roam all over until i found them took screen shot reported them then i`l kill them a few times until the left lol .  hate cheaters, exploiters etc .

A good fight is all the reward i need really for RvR , stuff we can buy be awarded is just a bonus,  never cared for bragging rights , my estem isn`t that low i need that lol .

hope  Ava on vol gets  good as thats the only thing keeping me playing  is the promise of fun  DAOC style Rvr . the personal story,  quest grind doesn`t intrest me that much .

How can a few people be so powerful to wipe out entire raids?

A very concise, short answer might also be, "This MMO is not Guild Wars."  Gear differential is huge.  Grinders beat strategists.  I had been immersed in GW2 for so long that I forgot about what other MMO's were like.