The Gaiscioch are community focused both in game and out. They have maintained a constant involvement with charities and hold regular special events. The Gaiscioch strongly believe that relationships and memories are the most prized possession we will ever receive and look to make those same memories and relationships out of the game world and into the real world.

In 2011, the Gaisicoch grew to such a size that it no longer was just a guild in a game. They grew over 1,500 members in just 12 months and began to see the potential for our social gaming community to help the outside world in our own way. Since 2011, they have been involved in annual charity events, corporate appreciation days, and also hold an annual pub night at PAX Prime in Seattle, Washington for members to meet and greet in the real world.

Being their membership is largely made up of mature adults between the age of 35 - 55 they found that they have more than enough desire to help others when they can and have an amazing ability to inspire those around us to help out as well. In their very first event the Gaiscioch placed 11th world wide in the Extra Life Charity Event as a Top 15 Contributor. They raised more money than Activision, Treyarch, Paragon Studios, and Wizards of the Coast for the Children's Miracle Network bringing in a total of $8,875.01.

The Extra Life Event is a annual charity event to benefit the Children's Miracle Network by recruiting gamers to play 24 hours straight to raise money for CMN. The Gaiscioch began participation in this event in the fall of 2011 where it placed 11th world wide raising $8,875.01 for the Children's Miracle Network. In 2012 we earned $7,908.00 placing in the top 25 groups worldwide. Combined the Gaiscioch have contributed $50,983 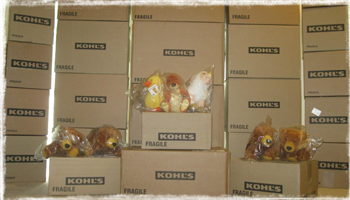 In March of 2012 the Gaiscioch Community launched their first ever Charity Event entirely planned and operated internally benefiting several children's charities. This event is open year round and benefits multiple charities at the same time. The first of which is KOHL's Cares which donates proceeds to Children's Educational Programs. The second is selected by the member from a lineup of partner charities that accept Stuffed Animal donations. The Animals ordered through KOHL's are then shipped directly to the chosen charity.

To date the Gaiscioch Family has shipped more than 626 stuffed animals to these children's charities.